ORIGINAL STORY 06/10/2022: Telford & Wrekin Council (TWC) has launched a letter campaign as part of its efforts to preserve the 24-hour Accident and Emergency (A&E) and women and children services at Princess Royal Hospital (PRH). 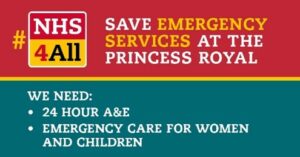 Plans to reorganise services at local hospitals – PRH and Royal Shrewsbury Hospital (collectively known as the Shrewsbury and Telford NHS Trust) – have been discussed since 2013’s “Call to Action” conference in Telford, from which the now-defunct NHS Future Fit scheme was created.

In the event that plans to close 24-hour A&E services at PRH went ahead, Telford would become the largest town in England without such a service.

In a brief sent to stakeholders, TWC said:

Across Telford & Wrekin, people have been fighting plans to downgrade services at Telford’s main hospital, the Princess Royal, for years. Telford & Wrekin Council have committed to fighting these proposals on behalf of our residents, most recently, at a meeting of Full Council in November 2021.

As part of this commitment, we are launching a new campaign to encourage residents to sign a letter to the new Secretary of State for Health and Social Care, Thérèse Coffey, to make their voices heard, urge her to reconsider plans and make the investment needed for the best possible care for everyone across Shropshire, Telford and Wrekin.

The campaign has launched a new website where people can sign a letter intended for the Health and Social Care Secretary, Thérèse Coffey. The council hopes that public support will secure an in-person meeting with the Health Secretary.

“In a nutshell, these plans will still see the Princess Royal lose its 24-hour A&E and emergency care for women and children as it becomes a centre for planned care,” said Councillor Shaun Davies, Leader of Telford & Wrekin Council. “This doesn’t make sense for our borough and we’re determined to bring this to the attention of the new Health Secretary, Therese Coffey, urging her to reconsider the plans and commit the investment needed for the best possible care for all across Shropshire, Telford and Wrekin.

“We’ve launched a campaign to give local people a voice and demonstrate the strength of feeling across the borough.  People are being invited to sign an online letter to the Health Secretary and share their support on social media. In the first hour of being live, we’ve seen nearly 2,000 people sign and this number is growing.”